NiP:
"I'm kind of happy that I haven't been doing completely shit"

Ahead of their semifinal matchup against G2 Esports we caught up with the boys from Ninjas in Pyjamas to talk about the recent addition of es3tag to the team, the surprise of GODSENT at IEM Winter 2021, and what it would take dev1ce to get back to that peak performance. 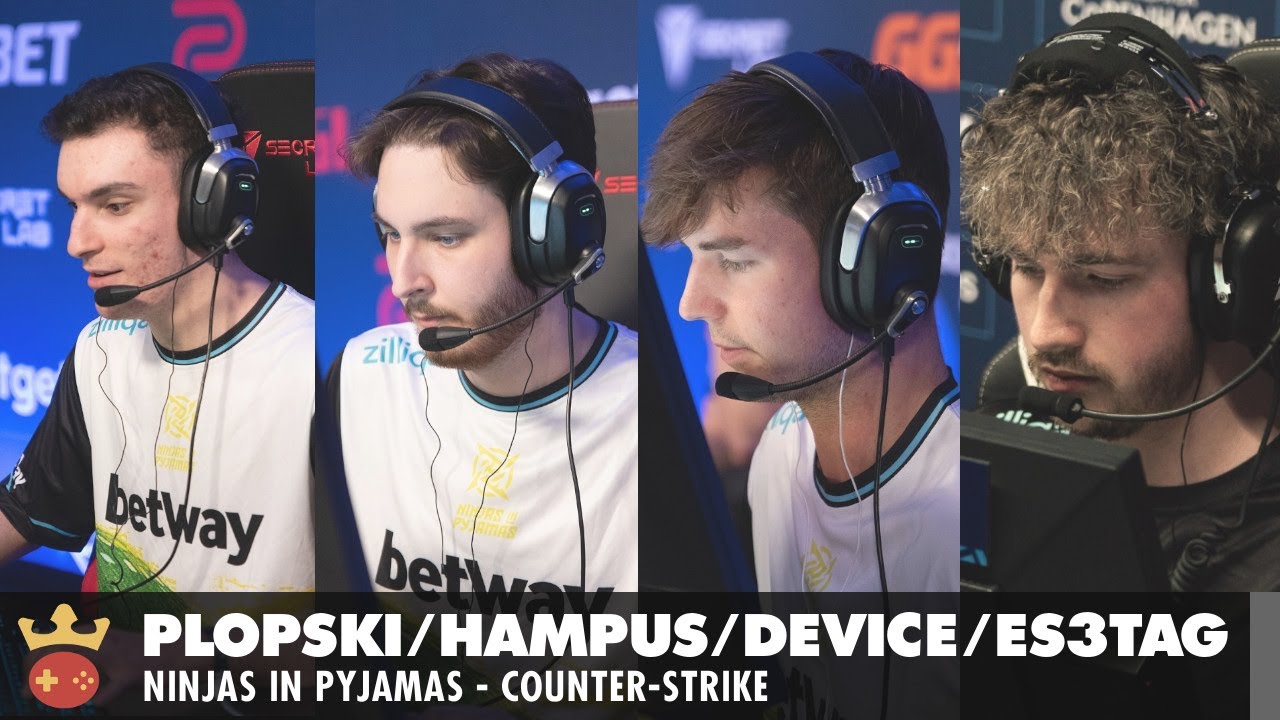 Video of Interview with Plopski, hampus, dev1ce, and es3tag from NiP at IEM Winter 2021

Grady: es3tag, you've just joined the team. Looking into 2022, what are the goals for NiP heading into next year?

es3tag: It's a transition period for me joining this team, learning a new language, that's the first thing. In order for me to operate at my fullest, I need to be more fluid in Swedish and be able to think faster in Swedish, which is going to be a transition period for me. With the break coming up and me being able to have a tutor one-on-one, that's going to help me tremendously for 2022.

I've only been on this team for roughly three weeks. In total we had a week of practice for six maps, that's absolutely ludicrous, and having three back-to-back tournaments, that doesn't really help us. It's really hard to say where we are as a team right now, I think it just needs more time. The goals for this team are that we all want to win tournaments, we all want to win a major, so the goal is to do that in 2022.

Josh: You played GODSENT in the quarter finals in a 2-1 game. I was wondering if you think they caught you off-guard, or if you were surprised by the new Brazilian team?

Plopski: Yeah, in some way they kind of caught us off-guard and regarding the whole tournament, I think they played really well. They surprised a lot of teams and people, they won against Heroic and BIG, which are two really good teams. Against us they also took a map, so I think they definitely played really well. They're starting to play better and better each tournament they've played, as I've looked into them a little bit. They have a bright future, because they have young guns and they have felps and TACO, the more experienced guys. So I think they will just be better and better with time.

Grady: dev1ce, coming into the next year, do you think you can possibly reach your peak that you experienced in 2018 and 2019, now with NiP?

dev1ce: Yeah, I really do believe I can do that. It's been pretty difficult for me with a lot of stuff - I'm kind of happy that I haven't been doing completely shit, even though sometimes I feel like that, but I don't feel like I'm washed up or anything. The most annoying part is probably the inconsistency that I have right now, and that's something I'm working on individually.

Grady: And what's that going to require from you, to get to that level again?

dev1ce: It's always hard work and priorities in CS - it's not something that you stop doing, it's something that's just periodically harder to maintain, that's the most important aspect. Building a strong roster that competes at all tournaments makes it easier to have a stable level of consistency, right? That's what you see with the Astralis lineup back in the day and a little bit with NaVi as well. If you're winning all your games, no one will have bad statistics.

What you're looking at is the statistical side of CS, which is an element that every player focuses on a little bit, but overall it's only about winning tournaments and competing for the top spots. I think that it goes hand-in-hand; the ultimate focus and what gives you the individual results is having a good team and creating good results as a team.

Josh: In the other semifinal, we have Virtus.pro and Team Vitality. Is there a team you'd prefer to play, one that you think you'd fare better against, or you do you not really care too much?

hampus: I would rather play against Vitality again, to get the rematch against them since we lost here against them. I can play VP as well, it doesn't matter, we have played VP a lot of times and we have lost more than we have won. I think I'd rather play Vitality.

Grady: You guys got kicked out of the PGL Major by G2 about a month ago, and you're coming in to face them here now in the playoffs. How does it feel coming into that game and do you think you can beat them?

hampus: It will be a tough game for sure. G2 are still a very good team, even if they don't have nexa. NiKo was an IGL in FaZe so he can still IGL, and kennyS is an insanely skilled AWPer - so anything can happen, right? We want revenge and I think we can get it since they haven't really had that much preparation with kennyS, but it's the same for us, because we have only had one week of practice with es3tag. It will be a good game and I hope we can get our revenge.