Heroic:
"We don't want anybody who's not wanting to kick ass"

Ahead of their clash with Team Spirit, we got to talk to cadiaN, TeSeS, refrezh, stavn from Heroic alongside their mental coach Troels Robl and physiotherapist Kasper Straube. We get all of the insights about how the performance team helps out the squad in preparing for their games. 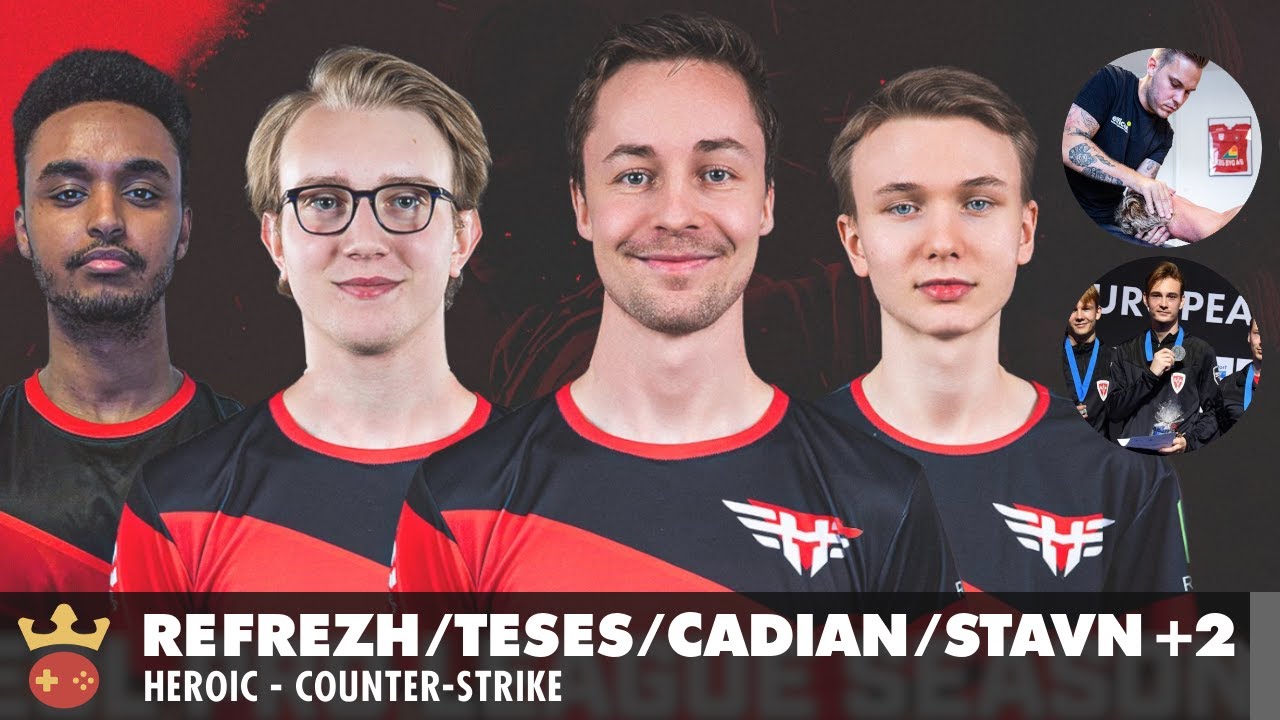 Grady: cadiaN, you've led Heroic now into the top five spot a couple of times. Do you find it harder to bring a team up into it or to stay there once you've got your place?

cadiaN: Maybe the right answer at this moment is to stay there. We've consistently stayed in the top ten, maybe other than one week with the roster change where we lost 40% of the points from niko and b0RUP, but other than that we've consistently stayed in the top ten. It's been hard to stay in the top three, top two, top one at least and that also showcases that the online era has been kind of crazy - there has been a lot of good teams, a lot of teams who've been fighting their best to reach the number one spot. If you look at the consistency of other teams, there's no denying that Gambit has had way more consistency than we have had. I don't even feel it's humanly possible to play as many tournaments and do as well as they are currently, but I guess that means that their philosophy and the structure is working very, very well and that the individuals is striving under it.

Our last one and a half years have been a little more chaotic, you guys as journalists also know some of the crazy scenes that have happened for the team, both in terms of players and others. That also means that performance can't always be as stable even though we are aiming for it. I think we can be very, very proud of how the COVID period has gone for the team and I also feel very confident in the players we have now that we can establish the same momentum for the future when LANs or at least studios are back.

Grady: When we last talked in February, stavn mentioned burnout from the number of tournaments you guys had been playing. How's that been into that middle section of 2021, how's the schedule feeling now?

stavn: In 2020 we played a lot more tournament than we have done in 2021 and I wouldn't say it's a big problem right now, but last year we also played like some Home Sweet Home Cups a few times and stuff like that. What's also been different is that this year we've been trying to get some bootcamps in with every tournament, so we can get to see each other and everything has been very nice. We've been having a really good hotels provided by the organization and it's just been really nice to play this year with the team as well, having both Troels and Kasper Straube. They have been adding really good things to the team and I've been really happy with how the organization has developed this year. Everything has been more professional and it's just really nice to play in Heroic right now.

Troels Robl: I think one thing to add to that is that we have changed how we approach tournaments also. Now we look at a lot more processed way; what do you want? what is the process that we want from the tournament? The guys have found it very easy to adjust into that kind of setting and it's really exciting and like Martin (stavn) said, we have an organization now that really supports the team and the performance and makes that a number one priority. Like Casper (cadiaN) stated in the beginning, you can see that when you look at what team has arrived here, we want to focus on performance. Content and all that of course is important, but number one is we want to perform, we want to win Counter-Strike matches.

cadiaN: But you are a bit suppressed at how good Kasper Straube is that the recording things. If other teams had a physio who could do video and content like this guy, they probably would bring him as well.

Grady: I'll ask about the support team you've brought with you here, but directed towards the players. You guys probably played on teams that didn't have such a support team, what is the thing that you've found the biggest positive out of having these guys helping you?

TeSeS: For me, I have always been an introverted guy who doesn't talk about feelings and stuff, but this team has helped me open up about my feelings and Troels also, he asks about my feelings a lot. It helps the whole team support me and you can feel everyone is accepting how you're feeling because every feeling is alright. It has been a learning curve for me, having Troels and the team and he's helped me a lot personally and I'm just grateful for that.

refrezh: I've actually dealt with some back issues. I got an injury, funnily enough it was from lifting my luggage, it was pretty heavy and I've had some issues while playing sometimes. It was a joy that Kasper Straube joined because he really knows how to help me exercise, help me give me a treatment. I think it's great to have Troels and Kasper Straube because they can work on the emotional and the physical part of the game. It's been so important for the team and we are working with Troels about how we think and how we exercise as a team. With Kasper Straube we are trying to solve issues with the body; if you have any pain, if you have any stress, and just to move around. It's been great to have these two.

cadiaN: Just one quick thing, as you can see they're both young, looking good, fresh. You could probably find people who had more experience as a mental coach or more experience as a physiotherapist, because Kasper Straube and Troels are both young. That also means that the players feel a greater connection to them. These guys also play a bit of CS themselves, don't necessarily check out their ranks, but they are close to the team because they are invested in the team. I see other teams having people who might have crazy degrees, but if they don't have the heart and the passion for it, then at least Heroic is not the place to be. We want people who are working their ass off and are doing everything, for not only themselves, but for the guy next to them to be able to perform. That's a mentality that both Troels and Kasper Straube bring to the team and that's just super important, because we don't want anybody who's not wanting to kick ass. They want to do that, they're not scared of working the extra hours.

Kasper Straube: If I can just add a little something, we do have crazy degrees Casper (cadiaN). When we are working as I do as a physio or as Troels does, we're not working with the players directly at all time, but I also think we contribute with stability and calmness. I think that the players know where we are and they know that we can support them all the time. That contributes to performance and a good situation for the players, so I think that's also a very big part of the job that me and Troels are doing. Not just talks that Troels is having or exercises/treatment that I'm having with the guys.

Troels Robl: Yeah we talk about a performance team, right? that's a team effort. Which means we talk together, we discuss certain things, because if somebody is affected mentally, they might be affected physically and vice versa. Yeah Casper's (cadiaN) right, I'm pretty young, but my experience comes from working with my father who is on Astralis in the same position, more or less, as me.