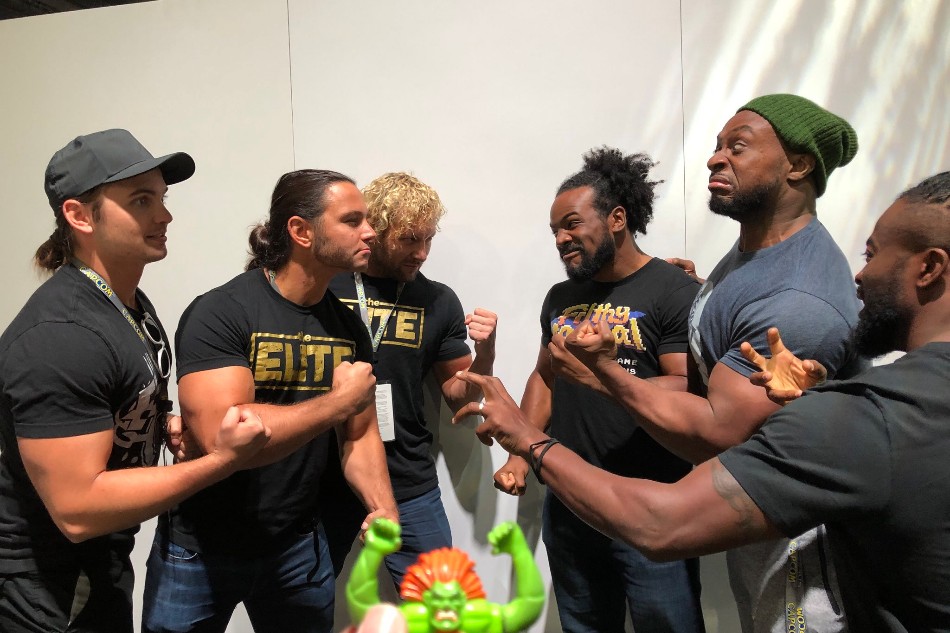 We never thought we would see the day when a professional wrestling stable from WWE called The New Day would wind up facing a stable from NJPW called The Elite. New IWGP Heavyweight Champion Kenny Omega would face Xavier Woods (aka. Austin Creed) in Street Fighter at E3.

The match-up was accompanied by the usual wrestling chants from the crowd "Fight Forever", "You Deserve It", "Too Sweet" and "New Day Rocks" even though the battlefield was a video game rather than a wrestling ring. Big E and Kofi Kingston were standing in Xavier Woods' corner while The Young Buck (Nick & Matt Jackson) were standing in Kenny Omega's.

The match had some added stakes as there was some habanero peppers thrown in - the winner would have to eat one each. The Bucks and Kofi/Big E looked on nervously as their fate was in their fighters hands. Woods chose Ibuki and Omega went with his signature Cody (all Rhodes jokes unintentional).

The two fought back to back best-of-three sets with the first to five wins being declared the winner. There were accusations of cheating, special move swaps and team huddles, but eventually everything came down to the final set. The score was 4 - 4 and the winner of this set took home all of the marbles.

Woods managed to take the first round, leaving him one round from victory, but Omega wasn't going to make this easy and fought back for the victory in the second round tieing the set up 1 - 1 and sending us to the final round. The round was a close one, but eventually Cody was able to KO Ibuki and seal The New Day's fiery fate.

All wasn't grim for Kofi Kingston and Big E, because despite Kenny's constant taunting of "Just open your mouth and put it in" Woods jumped on the grenade, he bit the bullet and decided to eat all 3 of the peppers for his team. This act of bravery annoyed Kenny and he proclaimed "Anything you can do, I can do better" before jamming one of the peppers and and immediately feeling the burn.

Amongst screams for milk, laughing from their teams and trying not to die - Xavier Woods got on the mic and thanked everyone;

“This day is everything we have been working for, for 3 years. We appreciate every single person. Anybody who has ever watched a dumb video we made, anybody who picked up a controller, anybody who has picked up a stick because they love the fighting game community. Four years ago I reached out to [Omega] on Twitter, I slipped into his DMs, I said 'Hey I love fighting games, you love fighting games, we both wrestle, but we are from two different worlds and hopefully one day we see a world where everything comes together.' Today was step 1.”

Both Woods and Omega showed respect for each other, told some stories of how this came to be and then threw out some catchphrases to end the show.