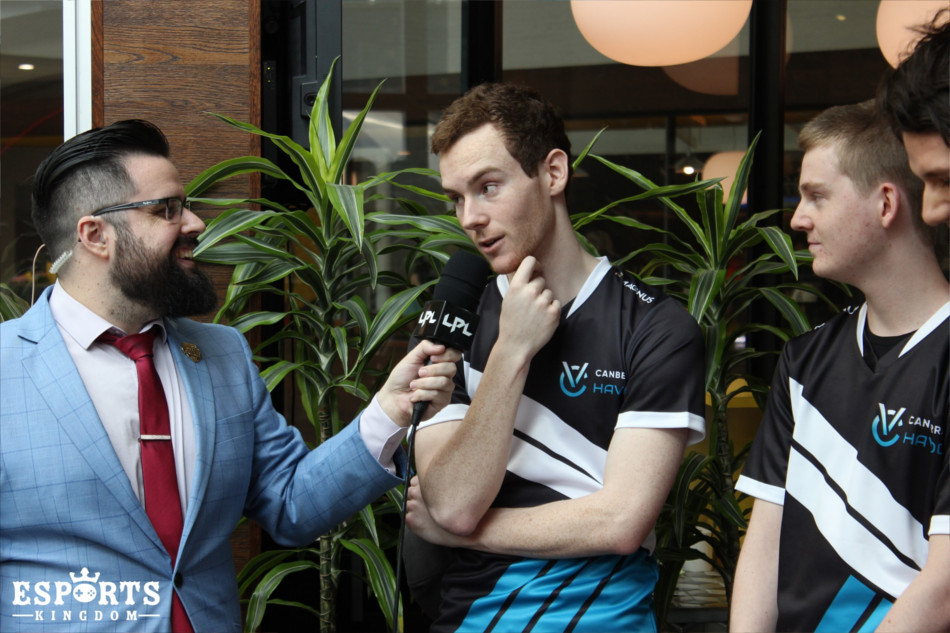 Canberra Havoc Walcott:
"We tend to take every game as it comes"

Canberra Havoc scored an upset over Chiefs Esports Club in the RLCS Season 8 Oceania Finals to secure their spot at the World Championship. Grady sat down and talked to Walcott about forming the team, the mentality of an underdog, and how it feels to be going to his first Worlds.

Grady: First off, congrats on making it to worlds. What's running through your head?

Coming into this, a lot of people were rating you guys quite low down and then you seemed to just upset, upset, upset. Did you go in thinking "Oh we're the underdogs, it doesn't really matter if we win"?

Yeah, definitely. When we played against Mindfreak, they were the last team in league play and we lost to them, I think that was because we knew it was a very winnable game. The games against the top teams, we kind of just went in just thinking "We will play our best Rocket League, see what we can bring to the table" and it just worked. That's what we told ourselves going into this LAN, we we're just going to play our best and not let the stress get to us. I think we did pretty well at that, two game sevens and we managed to win both of them.

The game against Chiefs today, the first game was really heavily in your favor. Is that helpful for momentum going on?

I don't think winning so considerably is actually that helpful. Every game is a different game and every team manages to reset, they did the same thing to us in league play and we managed to reset. Unfortunately Chiefs were having technical issues in that first game, so it's a little bit unfortunate - it would have been good to be able to replay it maybe, but it is what it is.

Is that just a mentality between the three of you of "Okay, we lost that last game, throw it to the side"?

The team itself is fairly new and none of you guys have been to worlds before. How has this come together?

I don't even know. It was just honestly a few little lucky moments through the league that got us into the top four. When we were here, we just played our own game without nerves, and I don't know how, but it just managed to get us over the line.

When coming together, the three of you players, what drew you guys together?

I was playing with Le Duck in the off season and SPYDOGE was on another team - the team wasn't a top four contender team, but you could see he was really a star player. When we practiced against them, he was just always killing us. Then that team disbanded and I said to Le Duck, cause we didn't really know who we're going to play with as our third, I said "SPYDOGE. He destroys us. Why don't we try and get him? I would love to play with a player that I hate playing against" and it worked.

Is that always the case? Is it pure individual ability or is there that element of fitting together as a team as well?

Le Duck and SPYDOGE played together last season, so it was good because we had chemistry to start with. It was definitely helpful and I think it's probably the only reason SPYDOGE actually said yes to playing with us. It's definitely helpful to have chemistry before even starting the season and then just adding one player in makes it a lot easier rather than a fresh team altogether.

Outside there with the Renegades winners interview, there was quite a bit of shit-talking going around. Is that something that just comes with the game?

It doesn't come with the game, I'd say that Renegades are just a bit like that. We don't mind, we'll take it all in jest, have a bit of a laugh, and maybe we'll show them up at Worlds.

Thanks a lot, man.

Thank you. Appreciate it.

Renegades Torsos: "I’d say I’m one of the best mechanical players in the region"