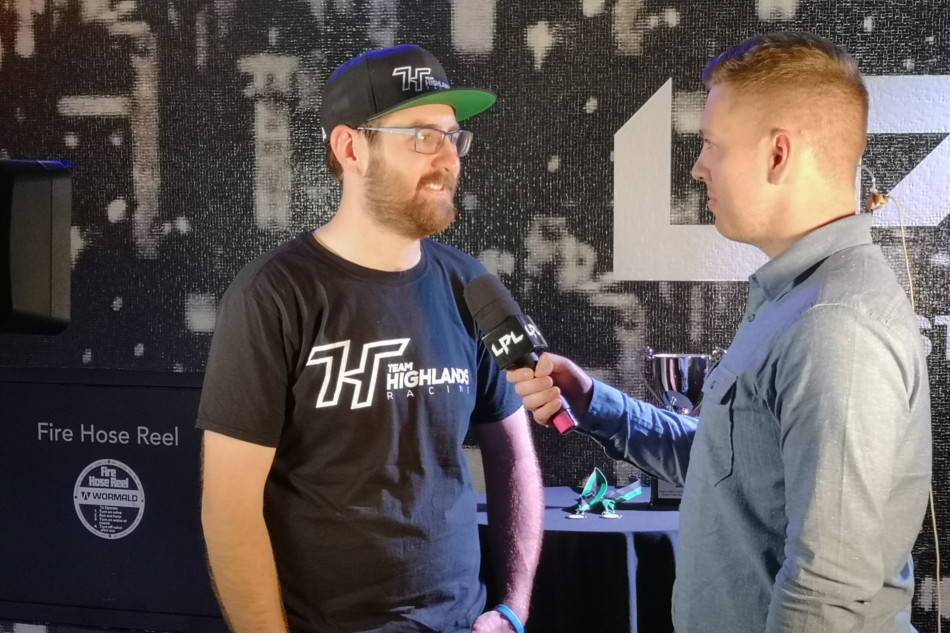 THR MadzieAU:
"If there’s an opportunity there, I’ll definitely give it a red hot crack"

Last night LetsPlay.Live hosted a LAN Final for their Project CARS 2 Season 3. We chatted to the winner on the night of the two Bathurst races, Team Highland Racing's MadzieAU, about racing sims as an esport, the mentality of second place, and where he wants his career to go.

Grady: You won the Bathurst exhibition here are the LAN final. How was the, in total, 30 laps you played?

MadzieAU: Tough, really tough. That first race, I had a bit of a wounded car, so I was just trying to keep MonkeyMatt at bay and I made one real bad mistake and it cost me that position - once he got in front, I couldn't catch him. A little bit unfortunate in the first race, not to get the win there.

In the second race I got a great start, was having a battle with Northway and managed to get the spot, then it was just head down and 100% focus. Came to at about the end of lap 14 and went "Oh crap, I've got one to go, back it down". I backed in a little bit too much and nearly got passed by Bull, but held on and got to the line first and won the event, it's great.

When you look at racing sims, everybody seems to talk more about their mistakes than their strengths. Is that just the different style of game?

Yeah, I think so. We're all capable of stringing clean and consistent laps together and it's the mistakes that, like in race one, it was that one mistake that cost me a position and that potentially could have cost me a win overall here tonight.Generally if you're in the front sort of guys and you're fast, it's just whoever makes the least mistakes is going to win the race or the event or whatever. That's why I think in sim racing they put so much emphasis on your mistakes and your errors.

When you're in second place or you're right behind someone - you can be there for 10 or 12 laps. Is it just "I've got to catch this guy, I still gotta catch this guy"?

You sort of got to try and obviously catch up to him and once you get there, if you get there, it's about figuring out where you're actually stronger and where they're not. Then you can try and exploit that weakness and get a pass done or you're just piling on the pressure and hoping for one of those mistakes, essentially like Matt did to me in race one, and then passing on that opportunity. So that's pretty much the game plan. A lot of us guys are so close in pace, it's really hard to actually get around or anything without a mistake or exploiting a weakness.

When you're trying to feel them out like that, would you prefer a longer race or do you like the 15 lap one?

A longer race is better because you've got more time to put it together. Once the laps start ticking down in shorter races people tend to get a little bit more desperate, myself included, cause you're like "I'm running out of time here, I've got to get this done", especially if the guy in front of you is just being rock solid and not making a mistake. You'd probably prefer a longer race so you have more time to think and you don't have to be as urgent sometimes. The short races created a little bit more fun as well, that urgency and that trying to make a move immediately rather than being able to play a game of chess with the guy in front of you.

You're kitted out with the Team Highlands Racing gear. What's it like, being on a team like that?

The support is great, especially at THR, where we're one big family and we got guys all over the world and where racing in all different types of things. When you are having an issue with something, I've got such fast teammates, they can jump on and go "Here, try this or try that".

Looking back during the season I got a feature race when in wet conditions which changed into dry and I didn't know whether I was going to be faster to go in and get slicks and waste pit-lane time or just stay on the wets. My teammates came to my aid and just said "Look, turn traction-control on, stay on wets - with the length of the race, you'd be right." and then I got the win. So being able to call on that vast knowledge of guys whenever you need is really helpful.

You are the sole Auzzie flying over here for this LAN. Do you feel like there's a bit of a rivalry in racing sims for New Zealand versus Australia?

There's rivalries in everything, we always want to beat each other. Well a Kiwi won the overall championship, but I won the final. Being the only Auzzie, it's pretty good to come over here and give the Kiwis a run for your money, that's for sure. There's definitely a rivalry there.

You got to fly here, but is there other events you get to fly around and go do?

Not yet, I've come close just recently, it was a Melbourne one that Matt's going to, unfortunately I had a disconnect in the last race. I've come close and I've qualified not too bad in world championship series, didn't quite get further along to get a trip overseas to Europe or something like that, but if there's an opportunity there, I'll definitely give it a red hot crack. Hopefully I get to go somewhere new, it would be nice.

Absolutely. I think once you're in it, you always want to try and strive to be the best you can be. I've now managed to come to New Zealand twice for this great event, but I'd love to get to something bigger. I've had teammates that have gone to these bigger events and I've talked to them all about it and stuff. It'd be great to even just get to one just to meet those guys, because you don't see them, they're from America and Europe. It would be fantastic to get to a massive event and meet a bunch of people that you only ever see in a race-car online. It'd be fantastic.