Mission Control's CEO:
"Our focus is on community building and social experience"

After reporting on Mission Control's partnership with the Special Olympics, we had the chance to sit down with Austin Smith, the Co-Founder and CEO, to talk about what Mission Control is, the cool partnerships that have forged, and what they are doing to build communities. 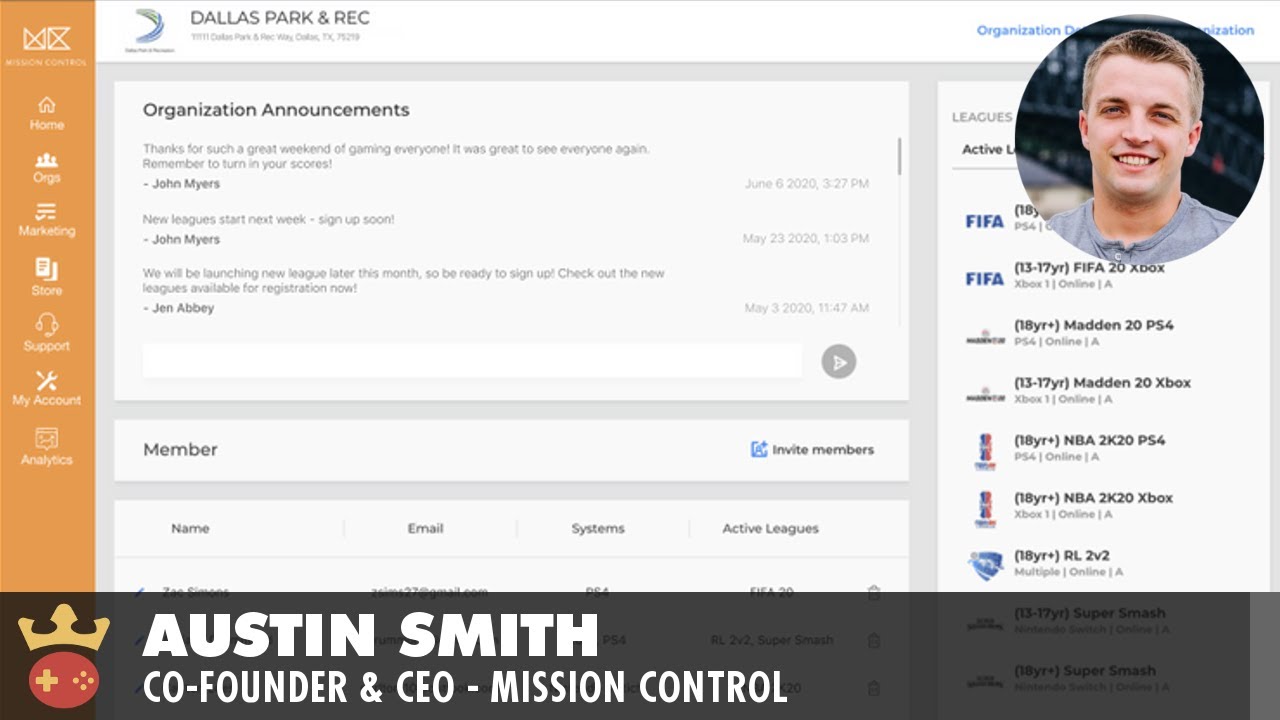 Full interview in the video above and a selection of the questions and answers below.

Grady: For people who might not be familiar with the product, what is Mission Control?

Austin Smith: Mission Control is a B2B SaaS platform for rec league sports. What that means is that we provide a software for organizations that typically already run rec leagues, like a YMCA, a parks and rec department, or college. We provide software for them to run these leagues, but instead of it being for baseball or basketball or something like that, we help them run rec leagues for esports like FIFA or Fortnite.

So you just recently partnered with Special Olympics New York and Oregon. How did that partnership come about?

I am trying to think of where it naturally came about. I believe the special Olympics of New York reached out to us through our website, just out of interest, they heard about us through the grapevine and we're looking for rec league esports themselves. I believe the Special Olympics of Oregon, which was right about the same time, just out of chance, was also looking for something to do in the esports space. They connected with one of our advisors up in Minneapolis and she connected them with us. Both happened right about the same time, it was a really natural partnership and both were just looking to innovate in this space of esports for their athletes. We are the right fit, given our focus on community building and social experience.

And you guys helping them run Rocket League events?

Right. They're specifically focusing on Rocket League right now, 2v2 matches through the unified sports organization. What we focus on is just building rec leagues, these two person teams are playing once a week throughout the summer. Something like seven o'clock every Tuesday, for example, is when they'd have a game and they play a new team every week and then at the end of the eight week season or so they'll have a couple of playoff games just like you would in any other rec league experience. The main point not being the competition and winning these leagues, the main point is having a good social and community building experience.

I noticed it was quite the selling point from the website - you sort of separate away from that competitive side and it is about community and having fun. Is that what drove you guys to create the platform?

Yeah, absolutely. Traditional sports is a great example for all of this. My first job out of college was working for a venture capital firm called Stadia Ventures and Stadia focuses on both sports and esports, but early stage technology and because of that, I can draw a lot of different conclusions between sports and these sports. There are 68 million individuals who play team-based sports in the United States and that is built over four different categories. You have pros way at the top, then you have amateurs playing minor leagues, then you have varsity play at the college and the high school level, and then underneath that you have recreational play.

The thing is the grand majority of those 68 million individuals in the United States are playing team-based sports at the rec level at their local YMCA, parks and rec, or just in a summer beer league and esports is built the same way. There's 103 million individuals in the United States who play multiplayer video games and the same thing is true, only a small portion of these individuals are playing pro, amateur, or varsity, and the largest portion is rec. Although that's true for traditional sports and esports however, esports didn't have a structure built for rec, it doesn't have a place where rec players can easily go and have a nice social casual experience with their friends. I realized that, and that's when the co-founder and I built Mission Control.

I know you guys have also partnered with a bunch of universities as well. How are those partnerships going?

Those partnerships are some of the most exciting, where we play at a university is specifically on again, the rec side as compared to what you might see as their varsity team. My Alma mater St. Louis University has an NCAA team and they might have 10 players on that basketball team who get to play these giant games in giant arenas, they have a huge following and it's a really big deal. At the same time, St. Louis University has a rec department that offers winter basketball and there's like 200 teams that sign up for that - 200 teams of 5+ people. There's a lot of people who want to play basketball, but there's only 10 people who actually play for the team at this 15,000 person university. My point is that there's a lot of people who like to play rec and for esports, that's what we do, we handle the software to manage the play for those 200 teams of people, rather than just the 10 players who are playing varsity. The varsity is still important, it's still really cool it's still going to blow up and there's great companies out there that are going to help with that, but our focus is on the rec side.

You look at it and you're going, we are helping places like universities and we are helping the Special Olympics. There's gotta be some sort of feel-good's there?

Yeah, there's a lot of feel-goods. Especially with the Special Olympics, because it's such a great organization and storied organization that has a long history of helping people and connecting people and specifically connecting people who might not have the history of access to a lot of experiences that somebody with abilities might have. I think that's one of the biggest things that's really cool, whether it's the Special Olympics or any organization, is that we're connecting people and especially in a time like we're at now with COVID-19, all these communities still exist out there. The college communities that we work with, the parks and rec geographic communities, government communities, they're still existing, but for safety reasons people can't come together at physical places, but they're still seeking that experience of community. The only thing you can do is digital and video gaming is a great forum for that, we just happen to be one who can help structure it.

And so you got parks and rec, you got universities, you got Special Olympics. What is what's next for mission control?

Yeah, we've got a lot of exciting groups that working with the rec area is what we're most interested in, obviously. That means parks and rec departments, that means college rec departments, that means corporate rec departments. Beyond that, there's just a lot of exciting ways that we can go, all focused on rec and casual gaming. We don't want to be in the competitive areas, we think there's a lot of cool companies in this space that are doing cool things and we want to support them, but we can be the first step of that funnel saying "Hey, this is where the casual gamers go". We think there's a long way we can go to improve the rec side, whether it's just creating bigger exposure or adding some cool features that are the best features for rec gamers.

If people want to take a look at it, a website or social media for Mission Control.

Yeah missioncontrol.gg check that out online and MissionControlGG on most platforms.