Sim-Racer Flynn Mullany:
"You do miss out on that g-force and the wind"

Today we get to tell the story of 18 year old sim-racer (and real racer) Flynn Mullany. We talk about how Flynn got his start at 12 years old in go-karts, broke into the esports scene when he was underage, and is now racing in Formula 4 - both in the video games and on the track.

If you want to get in touch with Flynn Mullany with regards to potential sponsorships, you can email him at flynn.mullany88@gmail.com.

Grady: What is your origin story? How did you get started in the racing world?

Flynn Mullany: I've always been into racing ever since I was a little boy. I loved cars and motorsports in general, but we never could really afford it. When I was 11 years old, we found some people that were able to get me in a go-kart, and I spent three years doing North Island racing and go-karts, I did pretty well. We ran out of money around the start of 2016 and we couldn't really afford to go-karting, so that's where I started my sim-racing career. I did pretty well with some of the LetsPlay.Live events, got into some cool competitions, then since I did so well in some New Zealand championships - I was able to race cars two years later from that.

What initially triggered that jump from racing the go-karts into sim-racing?

I think one of the main things was it was advertised a lot online and I was just starting getting into sim-racing. I wanted to see how well I could do in a competition and then popped up some events like the LetsPlay.Live Gran Turismo. I remember that was a big thing on TV and my parents saw it and I wanted to give it a go. I remember training for about a month before the competition, just with the same car, same track, just trying to get the times down. Even though karting and race cars are different on simulator, I still had a bit of an idea of how to drive the car.

I was able to learn a few things from some people and we managed to do pretty well at the event. I didn't find out until the end of the day of the qualifying for the event that I was actually too young to compete for it. That was a bit awkward, but I was proud of myself because I knew if I was old enough that I would have been able to qualify for it. It did give me an idea of "Okay, I can really start to do well at this" and then the possibility of racing cars may come later into that. 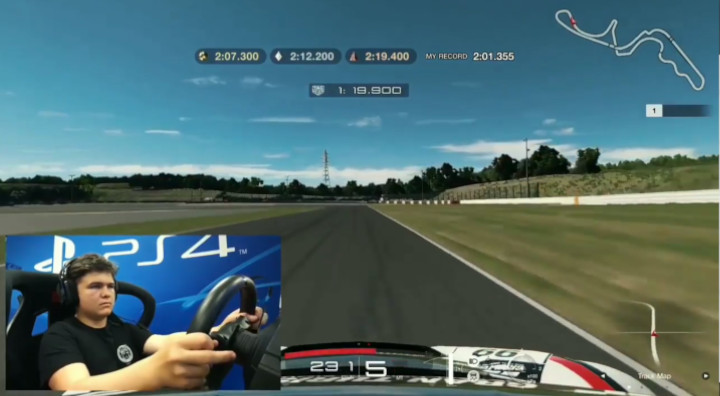 Screenshot of Flynn racing in the 2017 LetsPlay.Live GT Sport Qualifiers

I see you also an ambassador for Next Level Racing. How did that all come about?

During the summer when I was racing in the 86 Series, I was trying to find sponsors for it, and I was getting in contact with a few guys locally that are in the motorsport business. A few of my friends do a lot of the New Zealand sim-racing competitions and they said "Go and give a contact to Next Level Racing". All of a sudden COVID-19 happened and that changed a lot of our plans. I was thinking to myself that if I can talk to Next Level Racing about getting me a seat beforehand, I've been asked to race them all these different esports competitions and that could probably work both ways for us.

I emailed them, chatted for a while, and we were negotiating different deals and all that. Funnily enough, they're actually a few of the local guys who are about a 10 minute drive from my place, so I got to meet up with these really cool guys. They were super interested in my racing and they noticed how I did Formula4 before and all sorts of other racing - we have really good chat and it just worked really well for both of us. I've absolutely loved the Next Level Racing chair, I've got it here right next to me. I basically use it every day for training and when we were in lockdown I did a lot of competitions, including the Racing Local event with all the NZ all-stars drivers. That was a lot of fun and it's definitely such a different experience in these proper seats.

You've been down at Hampton Downs these past few weeks putting in some laps with the FT50. How is that real life driving different to the sim-racing?

Over the past few years sim-racing has definitely improved a lot, in my opinion, not just cause of me being able to afford some of the newer gear, but there've been a lot of cool stuff added to the world of sim-racing. Especially with what I've been playing recently, rFactor 2, which has most of the New Zealand tracks and actually has the two Toyota Racing Series cars. I've been able to use that to train for those test days with the FT50 and surprisingly enough, they're actually very similar with speed and cornering and everything feels right. Obviously being on the simulator, you do miss out on that g-force and the wind that's included when you're in the real life car. Overall it's definitely, and I say this to anyone who's wanting to practice for real life racing, sim-racing is such a cool thing that we're able to have in our homes and train for it whenever we want.

You talk about the wind and the g-force, do you prefer real racing to sim-racing?

It definitely depends on the situation, but ever since I've gone into real life racing it's made me say 100% this - it's so much of a thrill. It's not like you're sitting at home with your headphones on, you might have a bit of music playing while driving, but you're just in the moment you've got the screaming engine behind you and you've got these massive g-forces pushed on to you. Being able to drive the Toyota Racing Series cars, that's an awesome experience to do in real life. Definitely real life. 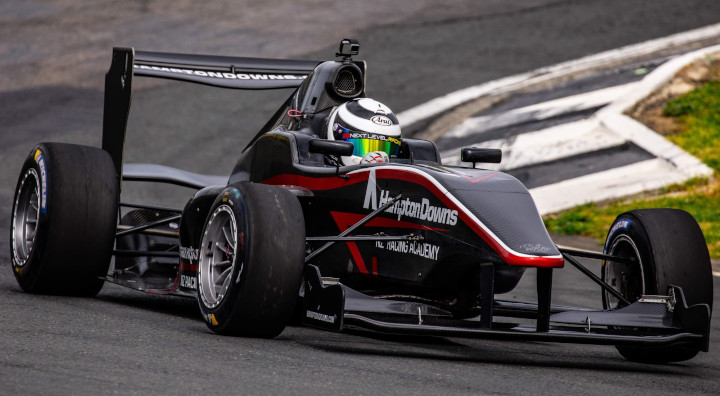 Photo of Flynn racing at Hampton Downs in the Toyota FT50

You have talked about a couple of competitions you've done recently. Is there a favorite competition you have had? or one that you had a lot of fun doing?

Especially during our New Zealand lockdown, I was asked to do a lot of competitions. I think the one that was my favorite was probably the International Formula 4 Challenge, which was basically all these global Formula 4 drivers, not just one specific category, all of them. We all came together, we do this one big competition and it was brilliant. Even though the best I got was around the top five, it was definitely awesome. I got to meet or I'm now good friends with all these new racing drivers from different countries and I got to race against some of the hardest drivers I've ever got to race.

It actually properly felt like a race weekend, I remember we had training for it on the Thursday and then Friday was qualifying and Saturday with the race. It was done in European times, so I had to get up at 3am in the morning to go and do the race and then go to mechanic school straight after, but it was really good fun. I was up against some big names and I managed to come out pretty well - I think we finished 8th out of 30 guys, so I was pretty happy with that.

I believe you've also been selected for the 2020 Japan F4 Motorsport Championships in October.

Yes, what has happened was we were being selected for the Formula 4 Japan Championship and we found a team, but during the whole lockdown, we are still trying to find our best ways of getting to Japan. We're still in the talks with them, which is really good, it's just the whole lockdown thing and the regulations of going to Japan - not just for me, but one of my coaches, Jono Lester, who's trying to get over there as well for Super GT. We're both trying our best to see if they can open the gates and if they can open them before round one, then we definitely want to get over, but at the moment it's all down to regulations. We've got backup plans here in New Zealand, luckily, but we're still trying our best to get to Japan even during this type of situation. We have been happy and honored that we'd even be selected to go to Japan for Formula 4. It's just waiting for us to see when the gates open up.

If we look ahead, what are your goals with racing and with sim-racing?

I've definitely have goals for both of those areas. My biggest goal in motorsports in general, and that's still been my goal ever since I was little, is to become a professional racing driver. I found out how big motorsports is in Japan and that really inspired me to want to go and compete over there. I think definitely my biggest goal right now is to look at racing in Super GT or Super Formula. That's definitely something we believe, especially as a Kiwi, it's a lot more achievable than going to somewhere in Europe and spending nearly millions of dollars. We've got a lot of people backing me on this as well. I've gotten help from Nick Cassidy and like I said before, Jono Lester is coaching me here in New Zealand. We definitely feel like if we can get the opportunity to go to Japan, I have a chance to show myself and hopefully live my dream

I still want to compete in esports as much as I can. I've actually made a team called Team Project, which the whole point of that is to help get people into motorsports and we've been creating teams from all areas of motorsports. We've had new guys and we've had professionals all compete and we've done nearly all the 24 hour and 12 hour events this year in iRacing. It's just a lot of fun to do as well. I definitely think my next goal in esports is to hopefully get my team into one of the top iRacing championships, that's definitely a goal for us.

If you want to check out Flynn Mullany, you can go to his Instagram, Facebook, Twitter, Twitch, or if you want to get in touch you can email him at flynn.mullany88@gmail.com.