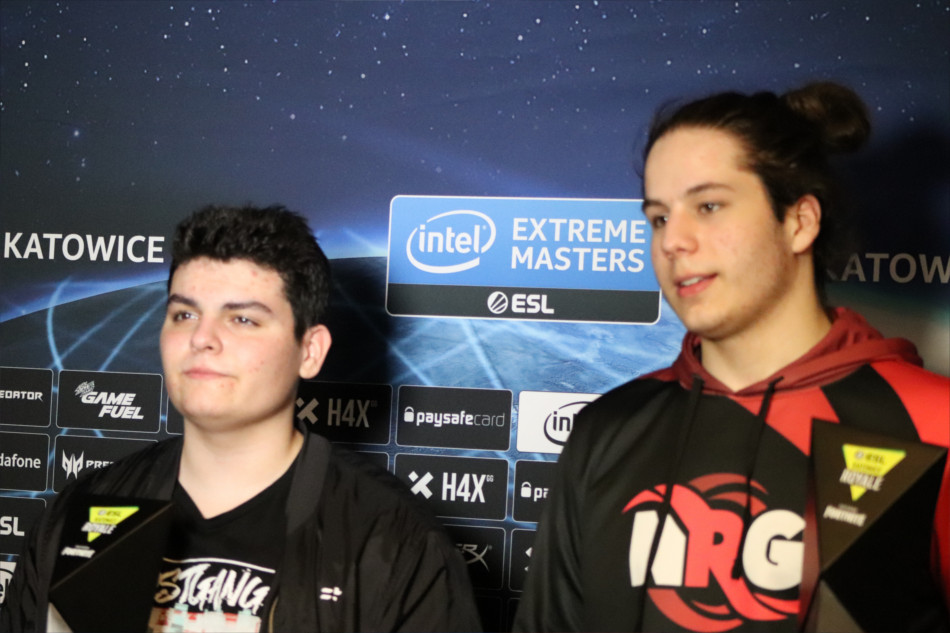 NRG Zayt & Ghost Saf:
"By far the best format we’ve ever had"

Taking a break from Counter-Strike, Jamie got the opportunity to talk to the duo of NRG’s Zayt and Ghost Gaming’s Saf, who won the first ESL Katowice Royale. They discuss Fortnite prize-money, the game-breaking bugs and how they came together as a duo.

Jamie here, with Zayt from NRG and Saf from Ghost Gaming. How are you guys feeling after that win?

NRG Zayt: Yeah, I have no words really. It's just all the crowd, everyone was so alive. It's insane and awesome.

It was a big prize pool tournament, couple of teams said that they didn't think it was big enough and they dipped out. How are you guys feeling about the prize pool in general?

NRG Zayt: I'd say for a LAN event, what we've had previously, it was a bit smaller, but if you compare it to other games, I think it's insane the amount of money that they give in the prize pool.

Ghost Saf: There's been some online events that are the same as this prize pool and then other LANs have been up to $2million. That's probably why people expect more in Fortnite.

It's understandable, especially with Epic putting the amount of money that they have into the esports scene for Fortnite. Let's talk a bit about the tournament. You guys were miles ahead of your next closest competitors. You won the 1st round, 11th and 12th rounds.

NRG Zayt: Yes, I think we won the 1st, 11th and 12th and after day one we were fifth, kind of close to top one, but today we just killed it and we were so ahead.

Ghost Saf: It felt good after the 12th game, knowing we were so far ahead and after the 13th game we realized the team behind us need to get 20 kills and a win and that's when we knew we basically had it in the bag.

You guys definitely seemed a lot more relaxed in that final game. It that just because you knew you had it in the bag?

Ghost Saf: Yeah, basically. I still wanted like a good average placement, so I was getting mad at him for doing all this dumb stuff mid-game.

NRG Zayt: Yeah, we did the math and the second team after after us had to win the game with 20 kills and we had to literally do nothing. I was kind of memeing around and Saf was screaming at me, but yeah, it was pretty funny.

There were some bugs that came up during the tournament, some players were upset. Were they really game-breaking or were they just there?

NRG Zayt: Oh, the bugs were definitely game-breaking. There's not only one of them, but there's at least six game-breaking bugs and you can be that one unlucky guy that it can ruin your whole tournament.

Ghost Saf: Yeah, we got the bugs plenty of games, we could have done better a few games, just because of the bugs ruining our whole game, but didn't super effect us.

So you guys are from different orgs. How did you two end up teaming up?

NRG Zayt: We used to play together before Saf was on Ghosts, I was in NRG, and back then the scene was more squads. Everyone was playing squads and Saf was playing with the Ghost boys, so he just went with Ghosts. Then since Fortnite you can play with whoever you want, it's not like you're stuck with NRG or yourself or Ghosts, so we just figure out who is going to play together since you mesh well.

It's a really fluid scene compared to other competitive games. So with this tournament over, how did you like the format with the point system? Did you think that it was a proper amount of points for kills and each placement or do you think that it could be improved upon?

NRG Zayt: It could be improved a little bit. I had to think about it, what I would change, but I think it's by far the best format we've ever had. It just rewards consistency, before in tournaments you would play one game, do well, and might win, but right now you have got to do well almost every single game.

Ghost Saf: I liked the format even though everyone else is used to "You win one game and you're in the money", but now you have to be consistent, which really proves who's at the top of this game.

It takes a lot of the RNG out of it, with the multiple games doesn't it?

NRG Zayt: It's the first tournament we had the 14 games. Usually it's always six, and six games is way too RNG, it's actually, it's not even competitive. I think 14 games is the way to go and we should keep doing that.

With this tournament over, what's the next big tournament you guys plan on heading too?

NRG Zayt: We've heard starting, I think April 13th or something, there's going to be a $1million tournament every single week online, for like a month or two.

Any LAN events that are upcoming?

NRG Zayt: There's probably some coming, but we have no information.

Well, thank you both very much for sitting down with me and I know you guys have had a long weekend, a long day, but I appreciate it and I hope you have success in all your future tournaments.

NRG Zayt: Thank you very much.