March’s Dreamhack Open pitted eight North American teams against one-another, for both a share of the $70,000 prize pool as well as a qualification spot at IEM Summer, hosted in Europe.

Team Liquid was the clear favorite for 1st place, with Extra Salt their only perceivable threat. High Coast Esports, Triumph, and Bad News Bears all were looking to challenge for the remaining playoff spots, alongside paiN Gaming, the tournament's only South American squad. The final two teams, Rebirth Esports and RBG Esports, looked to take an upset victory over their competitors, but neither team was expected to make it past groups. The tournament stretched only four days from March 10th to 14th, each day of which brought viewer’s competitive matchups and surprising results as the new landscape of North American Counter-Strike continued to unfold.

Group A played out how most expected it to. In the opening round, Team Liquid took a 2-0 victory against RBG Esports, playing a close 16-12 Nuke map before finishing the series with a swift 16-5 victory on Mirage. Meanwhile, Triumph and High Coast Esports battled in a close three map series, with High Coast taking an early lead following a victory on Inferno, before Triumph edged them out on Train and Dust II.

The winner’s match saw Team Liquid continue their success, securing a 2-0 win over Triumph on Nuke and Inferno. High Coast then defeated RGB Esports on Inferno and Overpass following a strong performance from awper RCF, eliminating RGB and locking in a rematch with Triumph. This rematch would deliver in spades, with Triumph taking Inferno before falling on Nuke after a game that went to triple overtime, finally ending 25-21 in High Coast’s favour. Dust II would decide the series, with High Coast locking in a playoff spot after closing the map 19-16. 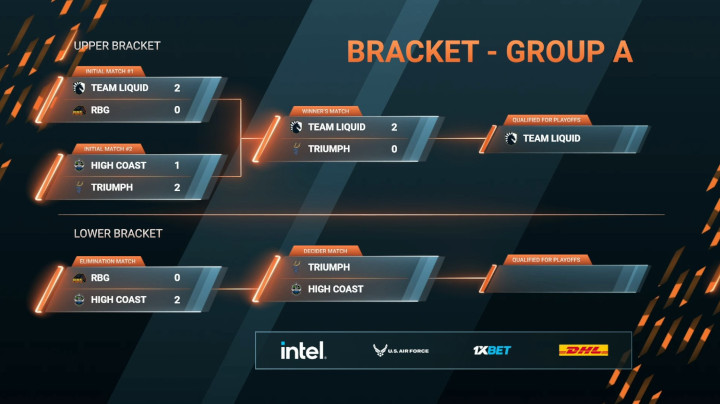 Bracket for Group A

Group B featured a clear favorite in Extra Salt, and it showed as the team took a relatively painless 2-0 win over the Brazilian squad paiN Gaming on Nuke and Vertigo, while the Bad News Bear defeated Rebirth Esports on Mirage and Inferno, with both maps going into overtime. Extra Salt would then secure the group’s first playoff spot with a 2-1 win over the Bears, dropping Train but quickly regaining form to take Dust II and Nuke.

In the loser’s match, Rebirth would attempt to take down paiN Gaming. Despite being up 10-5 at halftime on both Dust II and Vertigo, the squad failed to close out either map, being defeated 16-14 and 16-13 respectively. The decider brought paiN and the Bad News Bears together in a 2-0 affair that would include paiN massacring the Bears 16-2 on Inferno after a prior victory on Nuke, eliminating the squad and earning the final playoff spot. 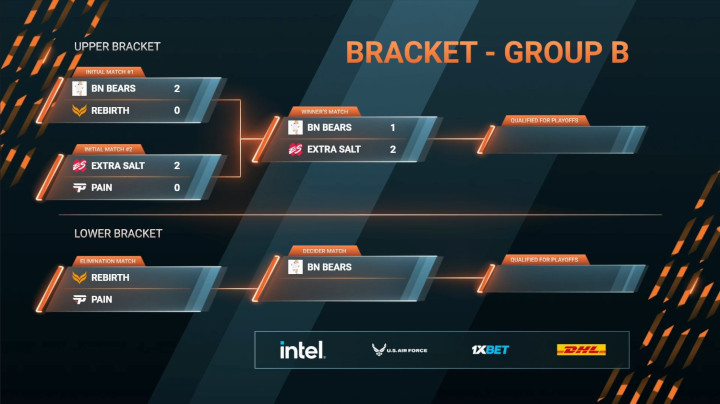 Bracket for Group B

The semifinals began with tournament favorites Team Liquid taking on the tournament's sole Brazilian representatives, paiN Gaming. Led by PKL, the underdog squad surprised everyone by taking an early map lead, winning Dust II at a score of 16-10 with Saffee, paiN Gaming’s 26 year old Brazilian awper, lead the scoreboard with 33 kills and a 2.0 ADR. However, the squad would not fare as well on Liquid’s map pick of Overpass, getting quickly snuffed out 16-4, setting the stage for Inferno as the series decider. Largely thanks to a 1.63 rated performance from Biguzera, paiN would be able to complete the upset after taking the map 16-8, advancing to the finals and eliminating the tournament favorites.

Extra Salt and High Coast Esports would compete for the remaining finals slot. The series began with a close 30-round game on Dust II, in which Extra Salt would secure the 16-14 victory after a stellar game from Sonic, earning him a 1.80 rating. Sonic would carry this momentum into the second map alongside a warmed up oSee, where the duo ran rampant on Vertigo, taking the map 16-11 after a 1.70 rated performance from the American awper to close out the series and set the stage for the grand finals.

The tournament closed with a best of five grand finals, pitting the undefeated Extra Salt against the underdogs of paiN Gaming. The series began on Inferno, where a respectable CT side and splendid T side carried Extra Salt through paiN’s pick 16-12. Extra Salt would then secure their pick of Train in another close game, closing it out 16-13 and setting themselves up for the clean sweep. The third map was paiN’s pick of Mirage, which remained a close 8-7 at halftime. However, despite paiN putting in another great performance, oSee once again stepped up with a 1.54 ADR and narrowly pulled his team to a 16-14 victory, earning the $30,000 grand prize and qualification to IEM Summer 2021. 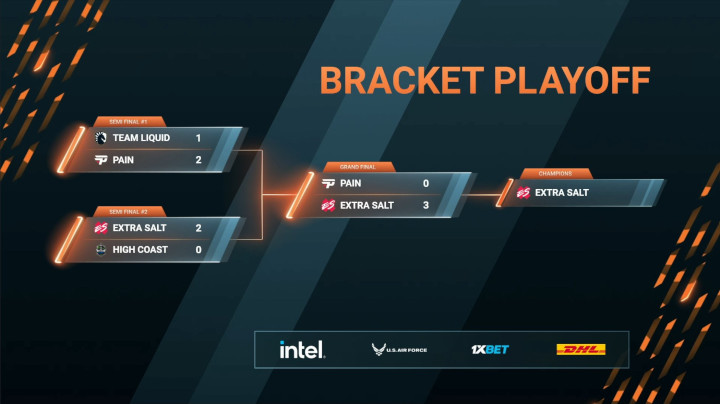 Bracket for the Playoffs

Dreamhack Open March was perhaps the best North American tournament of 2021 thus far, with all of the scene’s strongest teams - bar the Evil Geniuses - playing for a respectable prize pool and opportunity to play internationally. Unsurprisingly for some, oSee topped the tournaments standings with a 1.38 rating across 10 maps, beating out the likes of EliGE and NAF.

The tournament delivered several exciting matchups, yet paiN Gaming’s upset performance against Liquid prevented viewers from getting a long-awaited Liquid vs. Extra Salt game. All in all, this Open highlighted the potential of North America’s rising teams, proving that, with time, the region is still capable of producing top-tier teams.