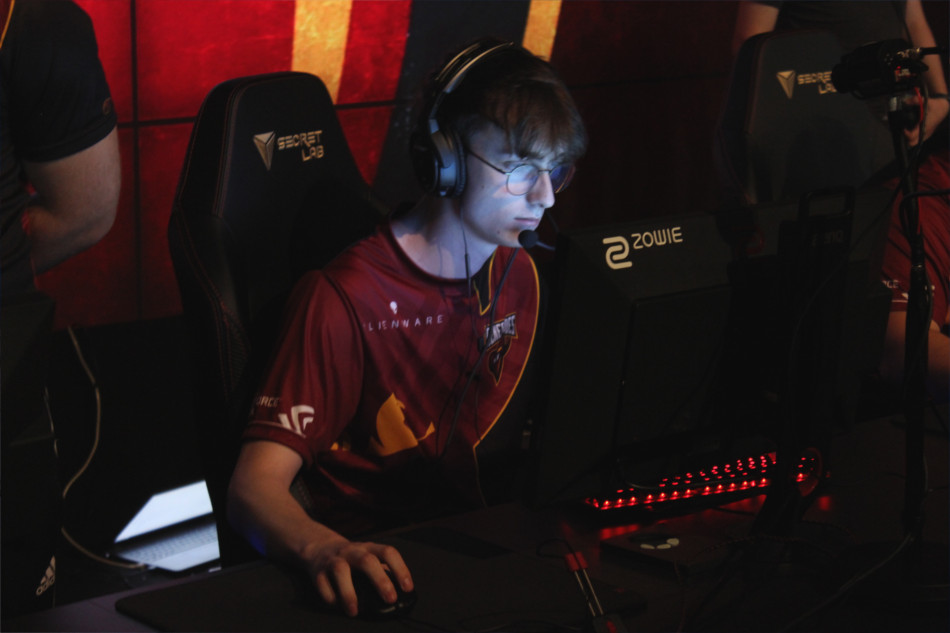 Renegades Liazz:
"I was getting ready for Dust2"

Renegades shocked everyone by taking out ENCE in the quarterfinals of the Berlin Major and advancing to the semifinals. We sat down with Liazz and talk about his professional career, the rough 0-2 start, and a strange bet he made with his teammates.

Grady: What was the adrenaline like immediately after that game?

Liazz: Oh dude, it's pumping through my veins. To me it's still so surreal, after playing that game on Nuke, I don't know if there is something wrong with my head, but I just thought we were playing another map. I don't think we win very many 2-0s, so I was ready to sit back down and get back into it, I was getting ready for Dust2. It's unbelievable. Last major was my first major and we made quarters, this is my second one ever and we are in the semis, it's surreal.

Your ride of being a professional player, it has had a big steep uptake recently. How's that been?

F**king fantastic. We dipped a lot after [IEM Katowice 2019] and we ran into a lot of problems - visa problems, then we had problems with keeping everyone in the same spot, and then we had a identity issues as a team. Even at our lowest point, I think we were still playing close against all of the top teams, but it felt so bad.

So you guys start off pretty rough 0-2 start, at that point it seemed as though the fans wanted the team's head. They were coming after players - cut this person, cut this person. What's it like being the human being behind all of that sort of abuse?

It sucks to hear. I think a lot of it's really unjustified because some of these people, that claim a player is not doing as well as they should be, really don't understand the inner workings of a team. I think that everyone in the team right now is doing something or they're sacrificing something for the betterment of the team.

Like Gratisfaction lately, he's taking it on himself to become more aggressive as an AWPer because our team decided that we needed more aggressive players in our team. Myself and Justin (jks) are both very passive, Aaron (AZR) feels like he needs to be a little bit more passive as well because he's calling. Sean (Gratisfaction) was a passive player by nature, but because we needed that aggressiveness, Sean is taking that upon himself and he's doing really, really great with it. Even though sometimes it might not look the best, it's just something the team needs and it's so important for the team, he's just doing it anyway and he's copying it all on the chin. You're not really a fan if you're talking down on your team, even if they are having a rough event.

When you were 0-2, did you have hope? Did you think you guys could make it?

That was a hesitant.

I made a bet with the boys when we were 0-2, that if we qualify for playoffs that I get a tattoo. I don't know if I'm going to stick to that bet or not. Before the event, we had a lot of good practice and we felt very confident coming into it and despite our first two games being losses - they were both very close losses and they were both against teams that made playoffs very easily. AVANGAR 3-1 beating Team Liquid, and NRG just blew everyone out of the water, they beat Team Liquid and they beat Astralis. So even at 0-2, I think we had a very good chance of making it into the playoffs, think there was any real hiccups, everyone felt confident in the whole way through.

Coming into this game today, it looked as though the map veto went exactly the way you thought it would go. How does the team come together and try to predict where that's going?

Sometimes it's a little bit more difficult if the team's got a really deep map pool, but usually they'll try and play to your weaknesses. Between us and ENCE, we have played each other quite a few times, we generally know which way the maps are going to go. We knew we were picking Mirage 10%, we knew that Vertigo is their permaban so they're gonna get rid of that, and Overpass is our permaban so we got rid of that. The only thing we weren't 100% sure of is if they were going to pick Nuke or Train and we just figured they were gonna pick Nuke because we were thrashed by FaZe a few days ago on it.

Later today, probably at the moment, the other two teams are playing - Team Vitality and AVANGAR. Which one are you hoping to go up against?

I'm not sure, because I think that Vitality is definitely the stronger team, but AVANGAR is a team that can just catch you off guard and really surprise you. You don't really know what they're doing any of the time and they're just a very awkward team to play against. For me personally, I would prefer to play against Vitality because you know what you're up against and you know to avoid ZywOo, but with AVANGAR you don't know what to expect. I'm not sure who's going to win that game. I have a feeling that Vitality is going to blow them out of the water, but I wouldn't be surprised if AVANGAR win.