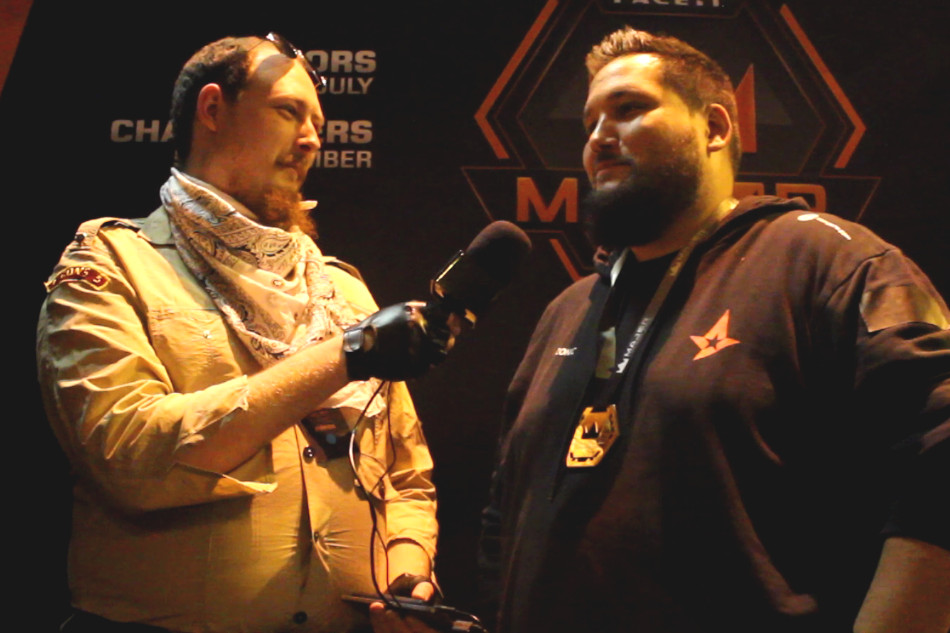 Astralis zonic:
"We are heavily inspired by some of the things from traditional sports"

After Astralis won the FACEIT London Major by beating Natus Vincere 2-0 in the grand finals, and before the confetti had time to settle, we were backstage talking to the coach behind the winning side. zonic gave us a lot of interesting insights while toting his brand new medal.

Grady: We're here, FACEIT Major, after the Grand Final, Major Champions. It's the cliché question, but how does it feel?

zonic: It feels awesome. We have been working really hard. In February we were sitting on a boat with Astralis, the whole crew behind Astralis and me, during winter for about 4 or 5 days, talking about how Astralis should look like. We just got Magisk on the team, and it was freezing cold, and we stayed there for a couple of days. Long story short, now we sit here with the major trophy within a year. That's just amazing and I'm super proud of the whole team.

Going into specifically this match, what was your preparation?

I mean we kind of expected the maps. We knew that there was a little chance or even zero chance of them letting Cache out, because they know that it's not one of our best maps, but that we play it as well. I'm kind of getting nervous on Nuke, because even though that we have that win streak, it's just about how everyone can look how we play, and sometimes it's difficult having to adjust and maybe play a little bit differently. But, we have our deep playbook on Nuke, so we kind of just played our own game, and it worked out really well for us, due to that T side. On Overpass, it has been kind of a joke with us - We lost it against North in Stockholm, and then we switched around, and we practiced during the Major Qualifier and the during the Major on the days off that we had here. We practiced a lot of Overpass with 3 on A and Magisk went B. NaVi didn't see it coming, so that was our dark horse for this tournament. I'm just happy that it all played out.

Was there a specific round on Overpass where you were like "this is it"?

From what I can recall, I have a really bad memory, probably the age, it was a lot of back and forth, but we knew how they were attacking A every time they did it. So we decided to place dupreeh and device heavily onto the bathroom side of things, picnic. It worked out I think, very well in the beginning, but then they kind of caught us off guard. We knew they were playing really slow, so we saved our utility, and whenever they executed on B we had smokes to block off some of the close entrances to B, that was key. Then on T we were just playing really slow, because we know that NaVi is an emotional team; So if things doesn't go their way, some of the individuals will probably try to get back into the game and play offensively. So we were expecting that and it all worked out just fine.

This is now the second Counter-Strike, CS:GO, Major trophy raised for Astralis. How does this one compare to the last one?

So, previously we talked to other Astralis members heading into the playoffs, and a lot of the time they talked about the support and warmth Astralis essentially brings, the family and being all together and having a sports psycholigst. Do you feel that these elements are things that the other teams need to now look towards getting?

I hope they don't.

Yeah, I think that there is more to it. I think that what we have been doing with Astralis is great. We have, I wouldn't say copied, but we are heavily inspired by some of the things from traditional sports. Our Sports Director, his name is Kasper, he's a former professional handball player, playing for Barcelona, so he knows how it is to be a professional athlete. So we have copied a lot of their stuff, their thinking. So yeah that has worked out, but I also have to give credit to the five players on the team, because they have been working really hard and they are special in their way, and the way we have put the team together is really unique.

How easy is it now, obviously huge excitement, to look forward to the next tournament?

Yeah, I would like it as a coach, because that's in my area. I would like to get the guys a couple of days off, but unfortunately we are going to Istanbul in Turkey, just two days after. I'm happy that it's in Turkey, because the weather is warm, and Istanbul is a really nice city. So, I'm happy that it is there, but it is really tough, because now you have been on the road for 1 month I think, so now we would like to go home just to relax a little bit. But, if I know the RFRSH department, the team behind Astralis well, we will have Danish media waiting for us in the airport, and we will probably spend the next two days there doing a lot of media stuff for our sponsors and stuff like that. It's going to be tough, but you have a little bit--It's better when you win, let me say it like that.

Coming through, you guys essentially had one of the hardest paths just to get to the Grand Final, coming up, not via the Legends system, but fighting through the Major and getting here. Going up against FaZe in the quarters and going up against Liquid. Do you feel that having that tougher path – there's no asterisk next to your win at all, you guys deserve that you're the best team in the world?

When we looked at the bracket, obviously I hated it, because I'm a winner and I want to get the easiest way to the victory. Obviously it's a nice and cool thing to say that you want to beat the best, but now when I stand here with the trophy together with the team, obviously it's really nice to have beaten, I think it was, the second, third, and fourth best teams on the HLTV Rankings. So that feels just amazing, and I'm just so proud of the guys. They deserve it, and they have been working so hard, so, yeah, speechless.

Thanks a lot man

Astralis: "It isn’t the same as when you are playing in the arena"